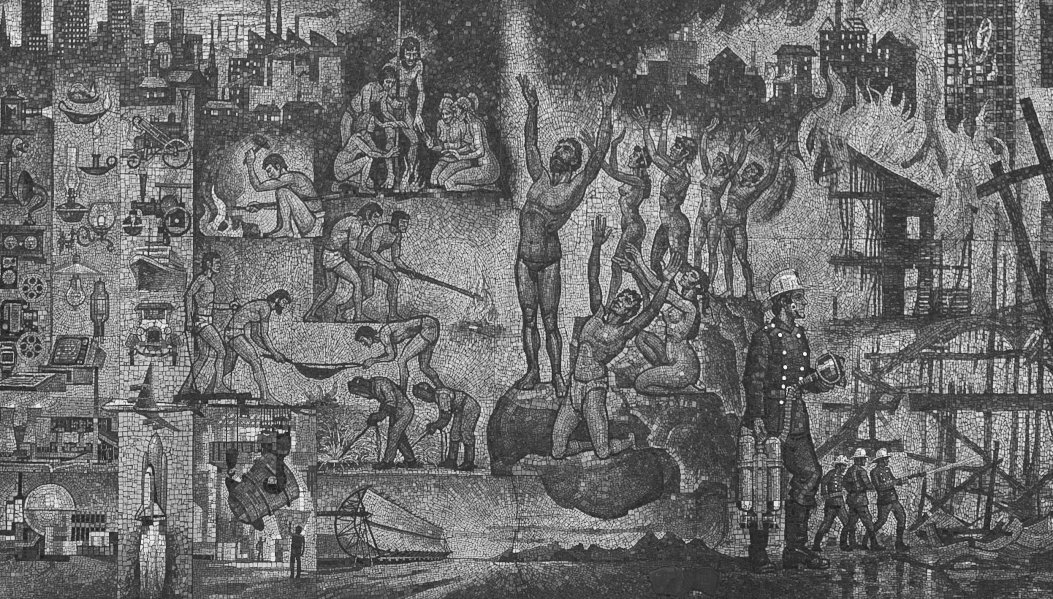 The titan Prometheus, on learning of Zeus’ plan to eradicate humanity, saved them with two gifts: fire, which they used to master many arts, and hope. For this act of solidarity, he was condemned to eternal imprisonment, chained to a mountaintop where his liver would be pecked out daily by an eagle. He kept up his defiance throughout (for which Marx named him “the most eminent saint and martyr in the philosophical calendar”) and was eventually freed by Heracles. His story teaches us that tyranny is neither unassailable nor eternal, and so we take his name for our new journal.

Prometheus appears at a moment of upheaval and crisis. We are in the midst of a global pandemic, an uprising following the murder of George Floyd, a crisis ridden capitalist economy which never recovered from the 2008 crisis that is now looking over an even deeper precipice, political turmoil at home and abroad, continuous wars of aggression and the possibility of ecological catasrophe all of which pose questions of the viability of capitalism and what can come afterwards.

It is surely not an exaggeration to say that we face stark choices about the world we inhabit and which future generations will inherit. The future of humanity will have to be fiercely contested. We have a fight on our hands.

With the lifting of the Covid lock-down, the question posed is “What next? Are we going back to life as before or is there the possibility of something different, something better?” It raises an existential question about the viability of capitalism and its ability to satisfy the basic needs of everyone.

Prometheus aims to discuss just that: what can come next? Is socialism irrevocably lost to the nightmare of Stalinism, or to a Social Democracy so watered down that it lacks any impetus for social change? What lessons can we learn from the highs and lows of the Corbyn experience?  Will the uprising against racism end simply with statues falling, or will it win more material victories? Can we resist the impending doubling down on austerity? Is all of this moot as capitalism drives our planet into ecological oblivion?

Recent defeats expose the failure of the socialist left to learn from the catastrophes of the long 20th Century. Notwithstanding the gulag and walls (physical or not) that imprisoned their populations, the ideological legacy of the Stalinist states plays a pernicious role in the working-class movement. The self-defeating compromises made by parties which claimed the mantle of socialism, demonstrate that tinkering with capitalism is not enough.

Working-class and socialist history is replete with examples of determined struggle to break out of the bondage of capitalism. It is also a history of defeats. If we are ever to progress, we must learn lessons from our past. Prometheus will attempt to avoid dogma and doctrinaire solutions. It will try to contribute to an analysis of the capitalist world that we confront on a daily basis. While learning from the past we recognise that the present is not the past, and we must work out how to apply any lessons to conditions that do not exactly replicate those of the past.

Socialism is a living body of thought which inevitably raises many differences of opinion. Prometheus aims to provide a forum for debate and discussion. This can only strengthen  the socialist movement by seeking to clarify our understanding of the world and the tasks we face.

Prometheus will be an unashamed advocate for socialist change. By that we mean a fundamental breach with capitalism; the abolition of the profit system; an end to the exploitation of labour by capital; and the creation of a new, classless society based on the common ownership of the means of production – land, water, factories, machines, transport and services, technology and science – and production run democratically by all in the interests of all. Socialism means the emancipation of all humanity.

The route to political power is through winning the battle of democracy. This stretches from the democratisation of the workers’ movement to the breaking apart of the existing undemocratic capitalist state and replacing it with a democratic republic. Full democracy must also mean economic democracy. That means achieving the democratic ownership of the means of production.

Capitalism is a global system that reaches into all parts of our lives, draws in and unleashes the oppression of people based on race, sex, gender and other real or perceived differences dividing the working class and humanity at large. This allows  for greater exploitation and dispossession of rights, resources and labour. These divisions benefit capitalism at our expense and as socialists we support all genuine movements that seek to dissolve divisions that set us against each other.

Prometheus enters a crowded space. It aims to create a forum for a discussion of ideas and debates from across our movement and society to collectively find a way forward. It seeks to earn its place as a serious journal for Marxist ideas and debate. We welcome you and hope you will engage with our articles and ideas.

Video: Do We Need a New Left Party?